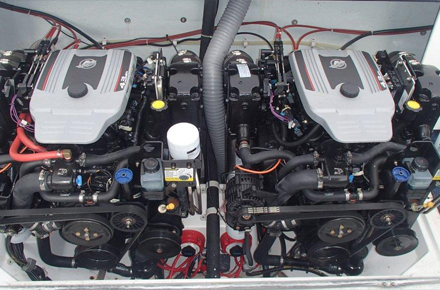 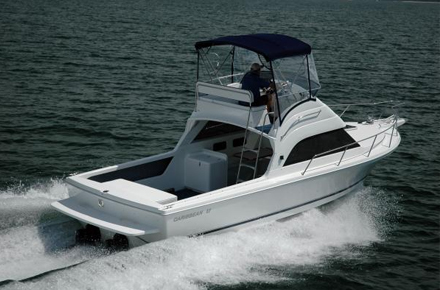 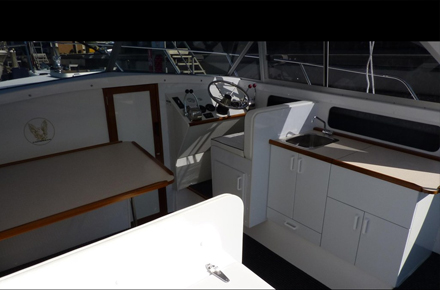 It was one of those déjà vu moments. There I was floating in the middle of Botany Bay, big bombers winging it overhead to Mascot Airport, rare wading birds from Siberia splodging about in the mud at the Towra wetlands, fishermen drifting nonchalantly across the steely surface in their knockabout tinnies, as Kurnell, the birthplace of the Australian nation, looks on like a forgotten friend in the distance.

But you know the really familiar thing? It was the boat underfoot, a surefooted Caribbean flybridge cruiser supplied by Sylvania Marina, one of Australia’s longest-serving boat dealers, who has represented these honest Australian-made cruisers from their Georges River-front marina for more than 30 years.

Only this Caribbean voyage saw me bobbing about on the new 27 Flybridge Sport Fisherman (FBSF) that replaces the popular 26 FBSF, which I first tested on this exact same stretch of water 20 years earlier. As though it were yesterday, I can still remember that test and see the images I shot on Kodak 64 slide film as clear as day.

In fact, the last two decades has seen this writer test every non-trailerable Caribbean cruiser to roll out of the International Marine factory in Melbourne. Founded on the if-it-ain’t-broke-don’t-fix-it principle, Caribbeans deliver very few unpleasant surprises, which means buyers are also comfortable jumping aboard.

In 1989, the 26 FBSF was released to replace the 25 FBSF, a true classic and one of the most popular flybridge cruisers on the Australian seascape. From 1964 to 1989, more than 1200 of the venerable 25s were built, with many still tied to marinas today. The 26 was a huge hit, too, with hundreds upon hundreds sold around the country. It was a wider boat than the 25 designed to accommodate twin V6 petrol MerCruiser engines. The new 27 is wider again, with more fuel and water, and greater head height in the saloon.

With that and other refinements, the new 27 FBSF is a better boat than the 26. Yet despite its increased dimensions and footprint, it ran really well through the water. (More on that famous ride later.)

“When I started in 1976, a Caribbean 25 was just about the biggest boat in town and everyone dreamed of owning one. The first one I sold cost $26,000 and would probably fetch that today,” explains Paul Ghosn, one of the founders of the Sylvania Marina.

What have changed over the years is boating attitudes. Two decades ago, a 25 or 26-footer was all you needed. Then came a period of bigger is better and before long, a 40-footer was king. It was then overshadowed by a new wave of 50 to 60-footers.

But if the second-guessing of International Marine is to be believed then small is back.

Along with the modest Caribbean 27 FBSF, International Marine released the 24 FBSF late last year to replace the popular Bertram 23 it made under licence in the mid-1980s. Although the 24 has a flybridge, it is trailerable (with a permit).

Thankfully, I was spared the worry of Sydney’s roads when I drove the 24 from the marina across – you guessed it – Botany Bay late last year.

Then there was the Caribbean 32 I tested on the bay in 2005. I have lost count of the number of Caribbean 35s I have spent time on. And the other week I was back aboard the next biggest model, the Caribbean 40 – yep – on Botany Bay again and for the fourth test of the boat since its release in 1999.

Where is all this heading? Unsinkable International Marine, which built Bertram boats under licence in Australia from 1963 to 1989 and continues to trot out Caribbean craft to this very day, has just turned 50. And for a boat builder in this day and age that’s cause for celebration.

The International Marine story began in 1958 when Arch Spooner built his inaugural boat in the Melbourne suburb of Scorseby. In his first year, Arch and his six employees trotted out 85 boats using the then radical material called Glass Reinforced Plastic (GRP).

Over the ensuing 50 years, through fair weather and foul economies, the iconic Australian marine business has built and sold more than 50,000 boats. These days, demand for its evergreen flybridge cruisers from 24 to 47 feet continues unabated. And, incredibly, the boat builder is still run by the same family.

With a non-trailerable 3.21-metre beam, there’s a lot more floor space and headroom for hanging out or hardcore fishing on the new 27 compared with the 26. The flybridge gains in stature, too, with L-shaped seating for mum and dad and now, a couple of kids as well. And there is storage for lifejackets, EPIRB and flares.

While there is still a lower helm station, the bridge station has been upgraded to include the key starts for the engines and twin sets of primary Smart Craft gauges including (sterndrive leg) trim, oil, temperature, volts, tacho and fuel, plus a 12V accessory plug switch panel with battery parallel function, and trick stainless steel wheel with crank knob.

And with a bimini and clears – virtually the only option fitted to what was a base boat – you gain a bigger and better enclosure for driving in inclement weather or in challenging seas.

Looking forward, the foredeck is noticeably bigger than the 26’s, with plenty of flare in the topsides to shed water, yet a nice fine entry at water level all the same. The side decks have moulded toe rails and there are cabin-side grab rails, plus a signature upright Caribbean bow rail. With plenty of non-skid on the flat foredeck you gain good footing.

Whereas the 26 has just one anchor locker, the 27 has two so you can carry your plough on the bowsprit ready to dispatch on the 12V Muir windlass at the press of a button from the bridge, lower helm or foredeck, or manually send a reef pick attached to a long length of rope asunder from the second rope locker for deep-water reef fishing.

Caribbeans are wonderfully low-tech construction, built using lashings of resin and rovings, and you won’t hear too many of them failing the test of time. The fold-down engine box grants terrific access to the MerCruiser inboard engines, plus the battery switches and bilge pumps.

Starboard lift-up panels conceal the pump for the cold water-only deck shower and the SeaStar hydraulic steering rams. There’s a separate floor hatch to the twin 70amp batteries and the oil reservoir for the hydraulic steering fluid. In-line water-separating fuel filters are supplied, too.

The GRP fuel tank of 550lt capacity, 50lt more than the 26 and with a dipstick, is amidships. The entire central floor panel lifts out for access to the tank should there be issues anytime down the track. Forward is the underfloor 160lt (up from 132lt) water tank. And with that and the supplied amenities you can weekend away.

The beam of 3.21m, up from 3.02m on the 26, creates a noticeably bigger boat with terrific stability. The whopping great cockpit measures 7.3m² and is perfect for fishing or staging lunch around a casual table with folding chairs (add a Euro-style awning for shade).

Whereas the 26 has scant little room in the cockpit alongside the engine box, the 27 is spacious enough to stand and fight a big fish. The stainless steel deckware is sufficiently heavy-duty and through bolted, with scope to add rodholders and outriggers to create a pocket gameboat.

I would also fit an aftermarket liftout rail-mounted gas barbie and a cutting board that drops into the same spigot mounts for fishing (such things are available from companies like Southern Stainless). There is also good support on your thighs and toe kicks when leaning outboard, while at rest the padded engine box lid doubles as a casual seat.

Storage exists in sidepockets for fishing gear, mooring lines, a bucket and so on. The floor was carpeted and the boat is fitted with a swim platform high enough off the water that it doesn’t affect the boat when reversing. As the sterndrive legs protrude underwater in any case, you may as well leave the platform in situ as a kind of line guide when fighting fish.

Last but not least, there’s a good sense of freeboard to keep the water out and crew safely aboard.

The 27’s layout remains virtually unchanged from that on the 26. But with greater headroom, you are less likely to strike the noggin as you step down into the saloon (always a danger at boat shows). There’s a dinette to port that will convert to a bed for the tykes on future models, I’m told, and a timber galley module opposite with sink, cold water, two-burner metho stove and plenty of storage space. Add a heat exchanger if you want hot water.

An insulated icebox is built in, though ice costs extra. And there is a lower helm station in case of inclement weather or for winter inshore cruising with the family. Sliding side windows help with ventilation and there are wipers on the windscreen.

“As I tell my customers, you are essentially camping on a boat like the Caribbean 27,” says Nathan Ghosn, son of the aforesaid Paul who founded the Sylvania Marina Caribbean dealership. To this end, a couple of airbeds tossed on the cockpit floor may prove a better solution for kids when weekending than converting that dinette. Storage space is in abundance under the furniture.

There is a vee-berth in the cabin with infill forming a double bed and a manual pump loo with overboard discharge that can be used at sea. White vinyl, blue upholstery, furry grey front-runner and clip-in carpet provide a finish little changed in decades. What you see is what you get.

Bad weather had forced the cancellation of our planned St Kilda test of this boat some weeks earlier. Forecast 30 to 40kts isn’t much fun, yet in some ways it wouldn’t surprise to see the Caribbean 27 come through it. Offshore in Sydney there were 12kts of wind and a somewhat messy 1.5m sea, but the boat felt reassuringly smooth and seaworthy.

As ever, it’s performance that attracts prospective Caribbean owners to the fold. To this end, the new 27 has plenty of get up and go. Top speed was 34kts whereupon the boat went from zero to 5000rpm in about 12 seconds! But the boat might need bigger props as it revved a tad too hard. I think they were 19in so 21in might be better. That said, this was a bare bones boat with no antifouling or gear. So the 19s might be the ones after all.

Cruising at 3200rpm produced 21 to 22kts and a dignified drive, while fast cruise of 25 to 26kts was clocked at 4000rpm. Offshore we pulled back the throttles for about 18kts and the boat rode really well into the short, sharp swell. It remained dry, too.

After the weekend, afternoon cleanup shouldn’t take more than an hour. That’s another advantage of a no-frills affordable Caribbean over a flash import. There’s not too much that can go wrong and the would-be skipper can take comfort from the fact the boatbuilder has been around more than 50 years, with the same Spooner family building Caribbeans to satisfy enduring Australian values.

Whoever said familiarity breeds contempt obviously wasn’t aware of the Caribbean range of down-to-earth boats. The formula for these evergreen cruisers has remained little changed for some 50 years: build a tough boat with not too many frills for those who like to fish and cruise. And this covers 90 per cent of the pleasureboat market. Compared with so many imported craft, it’s a good value cruiser. But look out for the 27 with Sylvania Marina makeover at the Sanctuary Cove International Boat Show. With outriggers and a bit of gear, it will be an even prettier boat.