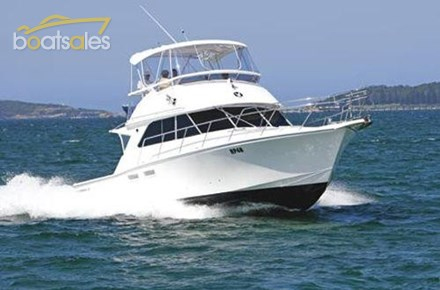 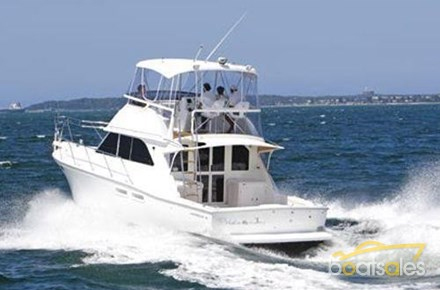 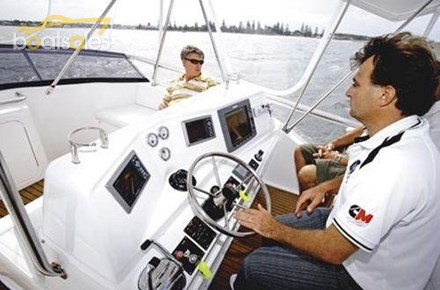 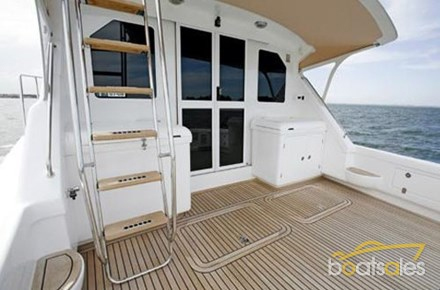 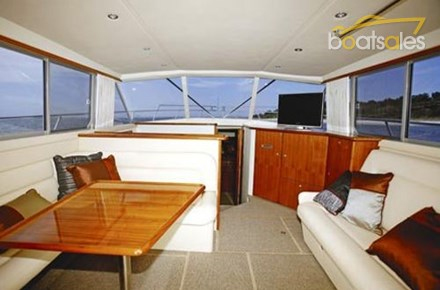 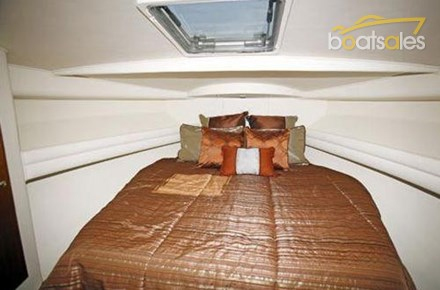 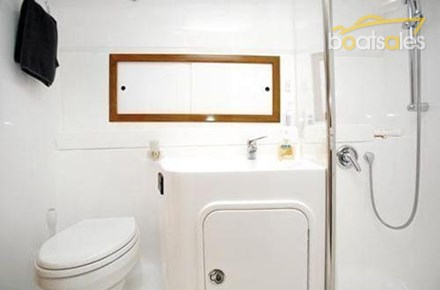 Like a rock, International Marine has stood against change, but advances in technology has forced the hand of the renowned Melbourne boatbuilder to embrace a new powerplant for the Caribbean 40, notes David Lockwood

Melbourne’s International Marine has been making Caribbean cruisers since the year dot. More than 50,000 boats have been built since Arch Spooner, regarded as the forefather of fibreglass boatbuilding in Australia, formed his plastics company in 1958 and quickly started manufacturing boats. Thus, this evergreen yard has the runs on the board. Who can argue with that? Okay, I will…

International Marine has for too long rested on its laurels and adopted an if-it-ain’t-broke-don’t-fix-it-attitude. Barry Spooner, who took over the reins from his dad Arch in 1971 and handed them to his son Richard in 2001, was always particularly obstinate about fitting electronic engines. In fact, it’s only because technology forced International Marine’s hand that its best-selling and, pure and simply, its best-ever boat, the 40, has now scored a set of those to-die-for Cummins QSC500 electronic diesel engines. And not before time!

Like a heart transplant, the Caribbean 40, which was released in 1998, has gained a new lease on life, a new set of legs or shafts as they were, and a whole new level of perky performance. The boat has been transformed from a workhorse into a wonderfully smooth, quiet and refined luxury cruiser. No smoke, no diesel drum-drum-drum, and much better fuel consumption. Now who can argue with that?

Don’t get me wrong, the previous Caterpillar 3126 420hp or Cummins 6BTA 450hp mechanical engines have proven reliable. It’s just that the latest common rail Cummins are something else again.

But International Marine has also refined – albeit subtly – the interior of its beloved 40 and, thanks again to this country’s biggest Caribbean dealer, Sylvania Marina in Sydney, the Caribbean 40 Pride and Joy was an even prettier and more comfortable cruiser than the bog standard factory-rolled boat.

Additionally, the charming owners of Pride and Joy, Rob and Joy Palmer, decided to do their bit to modernise. This explains why there are no external cabin stripes, something other competing boatbuilders ditched years ago.

Interestingly, the Palmers started out with a yacht, bought a Caribbean 24 cruiser, upgraded to a Caribbean 35 and then got really bitten by the cruising bug.

“We wanted more boat for spending more time away…two weeks at a time…and for entertaining,” explains Rob from the teak deck of his new 40. “Jervis Bay, Port Stephens…we’ve already done Port Hacking… but these are the kinds of places we’re looking at now.

“And, luckily, my wife loves the boat,” he said.

Unlike so many fishing-orientated 40s, Pride and Joy is very much the liveaboard home-away-from-home cruiser and, given its big fuel and water capacities, it’s a great boat for taking off for a few weeks or more. There are no outriggers, no rocket launcher, and the livebait tank is to be filled with drinks or dive gear rather than minnows on death row or roe.

The Ghosns from Sylvania Marina have put together enough Caribbeans that they know which options to tick best for each customer and what needs to done with their in-house contractors to make the revamped 40 even sexier. To this end, are custom-made Seaflex clears in the flybridge, an extended removable rear-cockpit awning, tinted saloon windows, teak cockpit, extra teak trim in the cabins and upgraded teak trim to the galley.

Pride and Joy had decent electronics including Raymarine E120 with depthsounder, engineroom and cockpit cameras, plus autopilot and chain counter. Sensibly, there is an inverter to run the TV at night without the generator and make a cup of coffee at dawn without waking your crew.

Although it wasn’t fitted to the boat, yet, Pride and Joy was about to gain one of those excellent Australian telescopic ADC cranes and an Aquapro RIB – the ones with an aluminium hull to take the knocks – with a 15hp Yamaha (best in its class) outboard.

Not a lot has changed outdoors in the 40, though there’s not a lot you need to change. The 10.3m² of cockpit is perfect for gamefishers and pleasure seekers. There is a hot/cold deck shower near the swim platform, which is big enough to kick back on, and an outward opening marlin door. Sylvania Marina added rope guards to protect the gunwales from mooring line chaff, pop-up cleats for swinging fenders, stainless steel scuppers and, best of all, a special clip-in deep-reach swim ladder. Bravo!

The aft-most deck hatch on the 40 leads into an underfloor compartment behind the fuel tank, giving access to the steering gear with a small amount of room left over for stowing stuff. But it’s the deck hatch forward of the fuel tank that leads into the lazarette storage area where, I noticed, the owners had stashed their dive gear, teak table and chairs. Add the aforesaid extended Euro-style awning over the cockpit and they can lunch on deck in shade and enjoy better weather protection during downpours (I can vouch for this latter feature during the past wet summer).

Behind the saloon window is the usual eutectic fridge/freezer and there’s a sink to starboard with enough bench space alongside to assemble lunch or plonk a salad bowl, plus storage inside the cabinet.

The 40 has good access around the sidedecks, backed by hand and bowrails, to the foredeck where you can unload the tender with ease, as well as tend to the bow lines. Pride and Joy had a sparkling 60lb stainless steel Manson anchor, secured in a way thieves can’t nab it, that should hold their pride and joy in a gale.

Rightfully, Ron and Joy didn’t want carpet runners in their boat saying, “What’s the point of having carpet covered by a runner?” So they sourced some really nice hardwearing berber carpet in a brown and grey pattern that looked great. Caribbean are to be commended for ditching their pleated vinyl upholstery on the saloon lounges and going for a straighter, more modern and firmer fit, too.

With some additional smooth mouldings here and there, the 40 is looking pretty sweet inside. And with opening side windows you get cross-flow ventilation. Pride and Joy had a 9kVa Onan generator but no air-con, however, Ron was adamant that with the spread of hatches and windows, you don’t need it.

As ever, seating exists for four around the portside dinette, with room for three on the lounge opposite that converts to a Pullman berth above and a three-quarter double berth below. This way the two-cabin 40 can, say, at school-holiday time, sleep six on beds or bunks and not the floor.

There’s no lower helm option on the 40, that went long ago, thank heavens, but a new feature is the low-profile entertainment cabinet opposite the portside galley. The low cabinet ensures surrounding views through the saloon window. In fact, with an autopilot remote, you could ‘drive’ from down here.

Rather than fit a TV in the cabinet, there was a flat-screen model mounted on top of it. In the TV’s place was a 12/240V fridge. I like the thinking behind this, in so far as you don’t need to run the generator or Shorepower to get the eutectic fridges down to have a cold drink or fresh milk at hand. Use the 12V fridge instead. That said, once run for a while, the eutectics stay cold for days.

The galley again reminded me that the Caribbean 40 is built for living aboard. There’s a decent bar-height fridge and top-loading freezer (both eutectic), as well as a terrific four-burner Fisher & Paykel cooktop with potholders. Pasta on the pick? No worries. No spillage.

Accommodation below ranges through a portside cabin with supersized bunks that makes it way better than just kiddies’ quarters to a stateroom in the bow, with a super-wide island berth that Ron found was, coming from the 35, huge and blissfully comfortable. I also noted good access up the side to the bed and a decent amount of storage for clobber. A nice choice of bedding finished things off.

Teak-tread steps enhance the passage to the flybridge, where there was the usual L-shaped lounge for four with a bench seat opposite for three that could be used for passage napping or as a daybed. The helm seats are the Pompanette type that I am accustomed to and, despite being low-backed, can vouch for their comfort.

The low moulded dash with angular lines is back in fashion, proving there’s some sense in not changing things and instead, waiting for trends to swing back around. Besides being hinged for easy access to the wiring there was storage space inside as well as behind the brow in the flybridge, where you can fit a fridge if you are into city cruising only. Otherwise, storage space is more precious.

The dash had twin SmartCraft engine-monitoring panels that tell you all kinds of important stuff from fuel consumption to range, and more. There was the aforesaid Raymarine E120 and autopilot, GME VHF radio, stereo remote, spotlight control, trim tabs, chain counter, and drinkholders. And, I noted, great sight lines to the bow and back to the transom for docking and scanning the horizon when cruising.

I previously visited the Caribbean 40 in 2003 after it had subtle makeovers by way of more curvy mouldings, better teak trim, and some touch-ups here and there. With a pair of 420hp Cats, the 40 used to top out at 30.4kts fully laden. Today, with two-thirds fuel and full water, and the latest 500hp Cummins engines, which each weigh about 170kg more than each of the old Cats, the 40 hit 30.5kts at full noise against the tide.

While top speed hasn’t increased much, all-important fuel consumption and cruising speeds have improved dramatically. Compared with the 420hp Cats, which pushed the 40 to 20.5kts at 2200rpm for about 150lt/h, the 500hp Cummins returned 24.5kts at 2200rpm for 130lt/h in one direction and 24kts at 2070rpm for 120lt/h in the other direction. Ah, the effects of wind and tide.

At worst, these figures suggest a 20 per cent better cruise speed for 20 per cent less fuel burn from an extra 160hp. As I said, who can argue with that? And even allowing for the fact the 2003 boat was fully laden, the new Cummins engines are so wonderfully quiet, smooth running and smoke-free that they transform the 40 into a more agreeable craft.

The improvements in acceleration are obvious, with the 40 shooting out of the hole without the old diesel roar and subsequent drone at cruise speeds. And while 2200rpm puts these engines in the groove, 1910rpm returns 21.7kts for 104lt/h – 100lt/h at 20kts is a handy passage-making figure when the weather isn’t so perfect. The throttles also have a synchro mode.

The Caribbean 40 turns well and not off its bow like some competitors. In fact, there wasn’t a drop of spray on the clears after our test in windy conditions where, at times, we cruised at 27 to 28kts at 2400rpm, the Cummins’ maximum continuous revs.

But, I guess, Caribbean knows its 40 hull is a winner. I can only hope it’s as impressed by the transformation that comes with fitting electronic engines. More runs on the board? For sure…and bowled over.

Great performance and user-friendly cruising thanks to the Cummins QSC 500 engines
Lots of cockpit space, tankage, range and seaworthiness
Good ergonomics and bridge driving position
Biggest bathroom and sleeping quarters in its class
With a pullman in the saloon, the boat can sleep six
Greatly improved finish has now been improved some more
Good value compared with its opposition
International Marine has addressed almost all the ‘lows’ in our previous tests of the 40