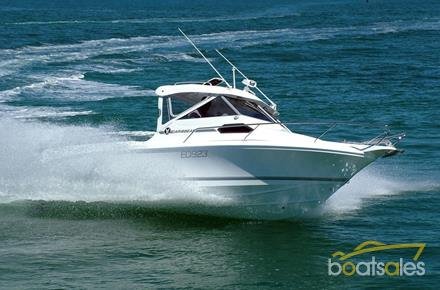 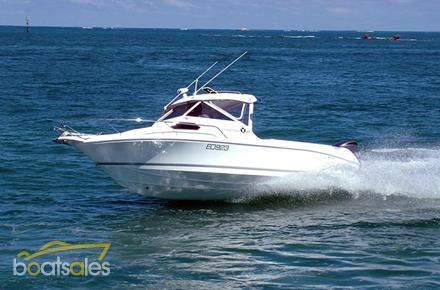 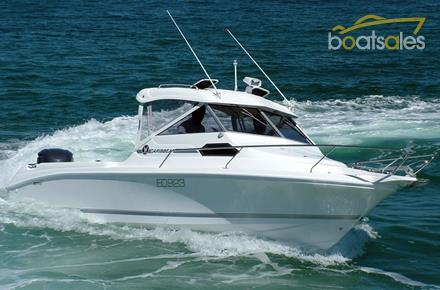 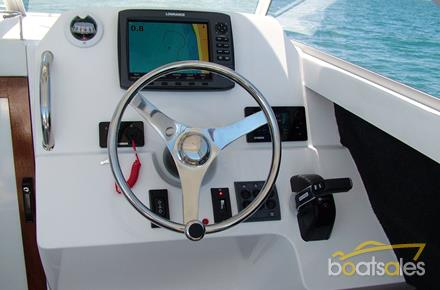 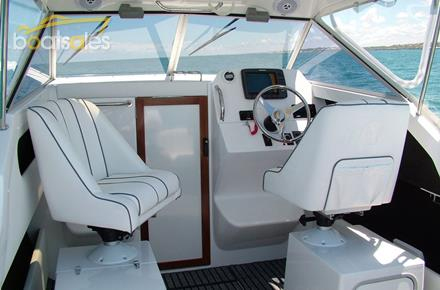 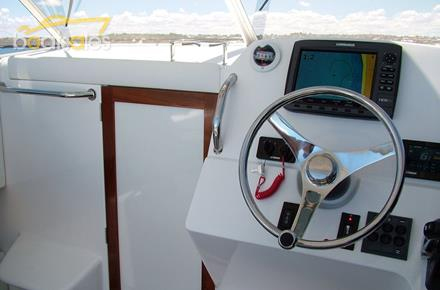 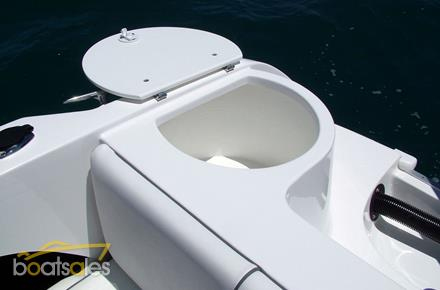 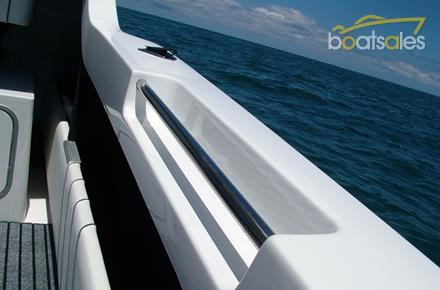 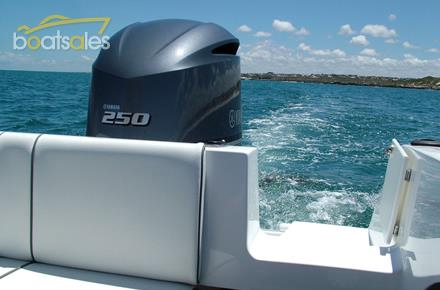 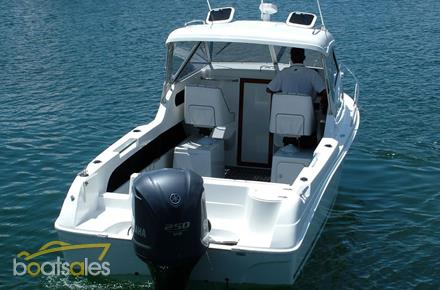 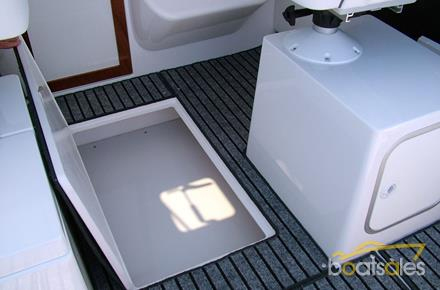 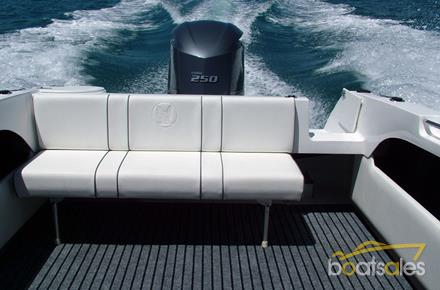 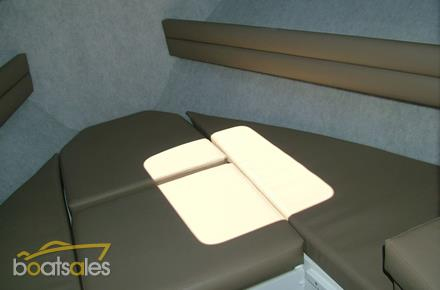 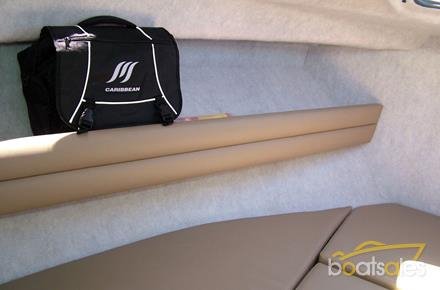 A tough, practical, spacious fishing rig with that touch of class

OVERVIEW
– This new product from International Marine in Victoria has people-power written all over it.
Why build a 2300 when you have the Reef Runner 21 and the Caribbean 2400, both very popular boats.

Simple. You demanded it.

As a result of customer feedback passed on direct to the guys at Head Office at Scoresby in Melbourne, plus through Caribbean agencies such as Perth’s Mansfield Marine, the designers got to work to come up with a blue-ocean fishing rig that was towable with no restrictions, as long as you have a good sized 4WD. Vehicles such as the LandCruiser, Nissan Patrol and the twin-cab utilities are very capable of handling this rig which comes in at under 3,000kg.

The Reef Runner has proven to be a great workhorse and the 2400 was a great hit when it was unveiled at boat shows around the country some years ago. However, the 2.69m beam on the 24 meant you had travel restrictions, plus you need a substantial vehicle to move it, not to mention the on-road fuel expenses to get to point B.

The Caribbean 2300 has an overall length of just over seven metres and a beam of 2.5m which translates to a rig which is spacious, has plenty of storage room and, on its aluminium tandem-axle trailer, can go anywhere.

Engine choice is yours and the transom has been left uncluttered giving you the option of a single or twin motor mount for those who want to head well offshore in remote areas and are seeking that extra ‘insurance’. Of course you’ve got the extra costs associated with a twin rig set up, but with today’s high-tech and reliable engines, I would think most people would be happy with one motor.

The review vessel made its public debut at last month’s Mandurah Boat Show in Western Australia and it went on show without an engine, having arrived in the State not long before the event. The fact the aft section was left bare just highlighted the amount of room available if you want duel engines. Complete with its “Aussie Debut” sign, the Caribbean 2300 was a great hit, attracting a lot of interest during the three-day event.

Brothers Travis and Coby Mansfield run the family business out of the Hillarys Boat Harbour in Perth’s northern suburbs and they have been busy with inquiries since the show, both from current Reef Runner and 2400 owners and those people considering an upgrade.

Both are qualified shipwrights and the review boat, like most of the whole Caribbean range they sell, is to receive a bit more love and attention before it’s handed over to the owner who lives on the Mandurah canals. Already some ‘customisation’ has taken place (more on that later) but next on the list is the installation of large port and starboard marlin boards on the transom, plus dive ladder. W.A. boaters love that word ‘customisation’ and that’s why we have so many plate aluminium trailer boats owned by fishing enthusiasts. Owners can add their input into the build to have the facilities to meet their needs.

Standard equipment includes the Muir anchor winch which comes with 37 metres of chain and anchor. Also standard is the hydraulic steering fitted on the transom so when the boat arrives it’s just a matter of bolting on the power plant of your choice and the electronics.

Again from customer feed-back, the dash is very roomy and big enough to accommodate single combo electronics or duel units. The choice is yours.

HULL AND DECK
– Heaps of room at the helm and out the back
The Caribbean 2300 hull is based on that of the legendary Bertram 23, with a modern new edge.

Keeping in line with the new bigger boats of the Caribbean fleet, the 2300 has soft and rounded edges including the swallow tail aft.

The fibreglass hardtop is stylish with its aerodynamic appearance but most importantly, it’s tough.  Supported at the rear by heavy duty stainless steel uprights, the front meets flush with the bullet proof toughened glass windscreen. Wipers are fitted port and starboard and when you’re in the seated position the vision is unrestricted.

There are no fitted side windows, rather clears with zippered sections, have been installed. So if you’re up north or in the peak of the WA summer, the clears can be removed completely allowing the air to flow through. The Mansfield boys thought there was a need for a bit of extra ventilation for our conditions so they have installed a couple of large vents in the hardtop so that the plastic clears can keep any spray from entering the helm station while the fresh air flows over your head through the open vents. Very effective too as demonstrated on the day of the review.

The stereo control and speakers, plus the marine radio and spotlight remote, are all fitted in the large console well out of the weather. The height of the moulded hardtop would suit the tallest person. I am of average height and hoisting myself up a good 200mm into the deluxe upholstered skipper’s seat, there was still plenty of room above me head.

Just under the electronics in the console there’s a heavy duty stainless grab rail you can either use to grab hold of to swing yourself out of the pedestal seats or, as we later found, provides a securing point if you’re standing between the two seats when the chop comes up. Similar rails are mounted in front of the passenger’s seat and on the left hand side of the dash. These are those little extras that I am talking about that have been done since the boat arrived from the factory.

WORKING SPACE
– Vessel with room to move
That beam of 2.5m provides plenty of space to move about and you can do that without any fears of instability. The Bertram 23 proved that and as mentioned the same traits have gone into this boat. I got the three of us, Travis, Coby and myself, to the starboard side and I would estimate we listed around 100mm. Great stability.

The wide gunwales can easily accommodate a power winch from hauling in the rock lobster pots. The broad side deck also continues to the bow so even though there is a large hatch in the cabin, you can walk around the outside to the front, with stainless steel grab rails along the length of the hardtop.

I’m not as agile as I used to be so every trailer boat I get onto I look out for things to make entry and exit easier and safer. International Marine has installed footrests on the port and starboard side pockets to assist getting into and out of the high-walled vessel. The carpet-lined walls have been left open, creating huge storage pockets each side.

Two large below-deck hatches can be used as kill tanks or for dry storage. One between the two seat boxes would easily take a dive cylinder rack for scuba enthusiasts, holding several bottles.

On the port side, the seat box is in fact an insulated ice box while the one on the right has a cockpit-facing hatch door and provides good storage — in this case for side fenders and ropes.

The review boat came with clip-in carpet which can quickly be removed for hosing down or left out of the boat altogether for those messy fishing expeditions when the deck wash will be required to hose down the non-skid surface.

Across the transom, the rear lounge drops down so fishers can lean into the back end with toes tucked well in to give extra support, or the seating can be removed and stored up front. A moulded plumbed live-bait tank sits on the starboard aft quarter and there’s a transom door on the left. As mentioned earlier, the Mansfield boys are about to fit large marlin boards on the rear and a ladder for swimmers. These additions are a popular option here in the West because a lot of time is spent anchored up in the many pristine bays along our coastline where boaters and their families snorkel the beautiful bays around Rottnest Island and the north end of nearby Garden Island which is open to the public during daylight hours despite being home to the HMAS Stirling naval base.

OVERNIGHT STAYS
In their wisdom, International Marine has realised that a boat of this size and expense should be multi-purpose. It’s not just a very capable fishing platform, but also a very comfortable rig for overnighters.

The lined lock-up cabin is very spacious with a vee berth and infill cushion converting it into a large double bed. There’s a manual-flush toilet in the centre and deep side pockets. Fixed side windows and a large roof hatch giving access to the twin bow lockers complete these standard features.

I made mention earlier of the timber-framed hinged door. The addition of the timber trim is a nice touch but being hinged on the left is not that practical. When opened, it tends to hit against the port bulkhead, plus anyone seated or standing on that side is hemmed in. Future boats heading West will feature a bi-folding door hinged on the right. It will then fold against the dash console.

There’s ample space in the companionway between the two seats. Earlier I also made mention of getting into the luxury seats. The bulkhead between the cabin and cockpit features moulded footrests, which are just perfect. They’re broad and sturdy. Adjusting  the slides, you can brace yourself against any oncoming rough stuff.

ON THE WATER
– A true 40 knot boat on the day
Fitted with the Yamaha 250hp engine, the C2300 proved to be a good performer. Not that you would want to do it all the time and certainly most conditions would not permit, but we got this rig to a top speed of 41 knots at 6,000 rpm on the day.

Without any effort we achieved this but you can’t do it unless you’re wallet is bottomless. Yamaha’s ‘fly-by-wire’ digital remote control is magic.

We pulled it back to a leisurely 22 knots, cruising and accurately tracking — pulling 3,500 revs and burning 30 litres per hour.

Running at that that cruising speed of 22knots, the 400+ litres in the fuel tank would give the Yamaha 250hp motor a range of around 315 nautical miles.

It’s a very comfortable boat to handle, although I found the steering a bit stiff. Something a bit of use will fix. I felt ‘at home’ straight away and it manoeuvred very well within its own length. Pulling up alongside cray and crab pot floats would be a breeze. The high freeboard adds that safety measure.

International Marine has modified the old Bertram 23 mould to create this hull but has built an entirely new superstructure to give the vessel a modern new look.

Caribbean is a 100 per cent Aussie owned company and all the components are built in Australia. During their 50 years operation they have produced around 1,000 boats per year of all ranges so they know what they are doing. Here in the West, their local dealer Mansfield Marine puts the icing on the cake.