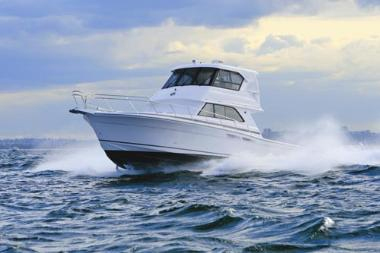 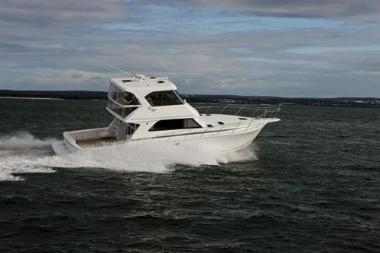 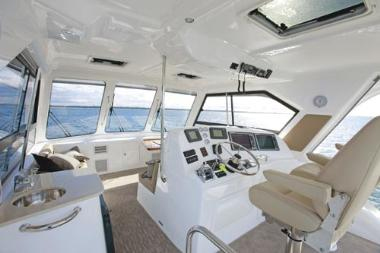 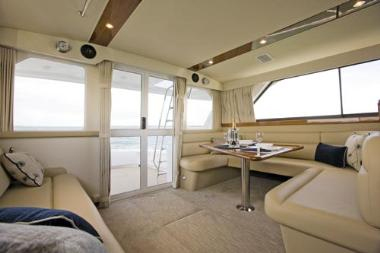 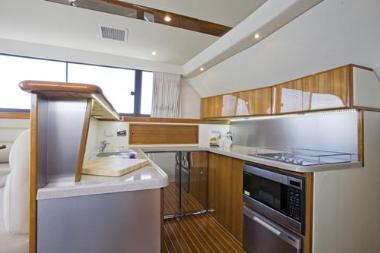 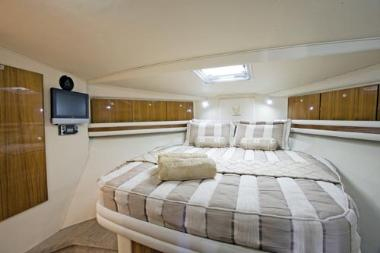 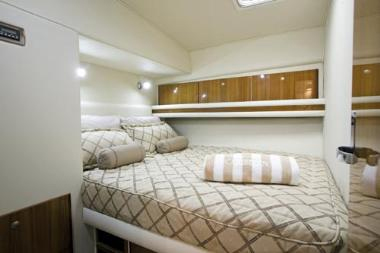 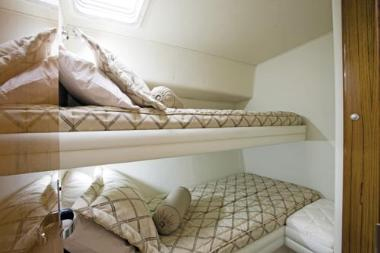 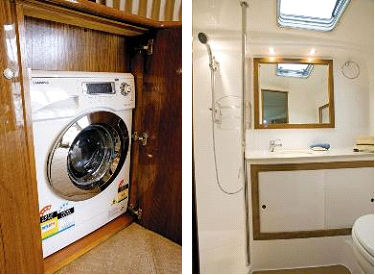 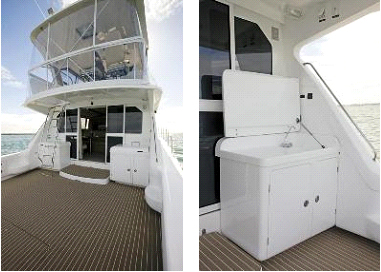 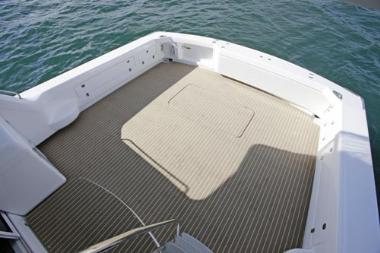 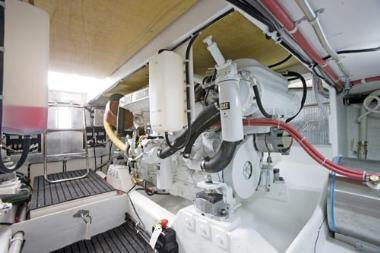 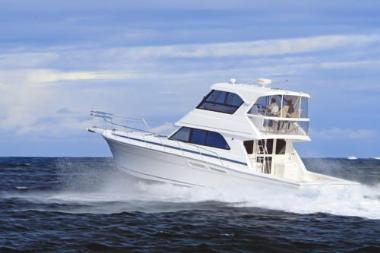 The flagship of the range, the Caribbean 49 follows in the footsteps and footprint of her predecessor, the 47, upon which she is modelled. Only the hull and cockpit have been extended, leading to a huge outdoor play-station for anglers, cruising clans and those who covet fresh air while on the water.

The supersized cockpit  — at 170ft² or 15.8m² it’s the largest on any boat in her class, boasts Caribbean — will appeal to the WA boating set, which is known for extending the cockpit on conventional production cruisers. Hardly surprising, then, that the first three 49s have headed west.

Meantime, the increased waterline length, as well as lower shaft angles than the 47, has also led to performance gains from the modest 715hp Caterpillar C12 engines. Simply, there is more lift and buoyancy, with the boat planing quicker and willingly at just 12kts.

She cruises smoothly all the way up to her not insignificant top speed of 31.7kts. And without calling on trim tabs, the boat seems to travel rather flat. Our test day was wild and woolly, plenty of spray was tossed about, but there wasn’t a hard thump to worry us. And the wipers ensured clear vision in the enclosed flying bridge. (More on the ride later).

Melbourne-based Caribbean boatbuilder, International Marine, has succeeded in creating a second saloon or living station within her flybridge, which you access via a traditional cockpit ladder. Although the same size as the now defunct 47, the finish and mouldings have improved to give the boat a more sophisticated appearance.

The quality of the mouldings and general fit were commensurate with a million-dollar boat. At the same time, while not exactly pretty, the stainless steel support and abundant rails bow to safety at sea. The hinged dash is also great for accessing wiring and aftermarket electronics fitups, with an overhead radio box adding to the mix.

Among the comforts are a portside lounge and L-shaped dinette, with cushions covered in a caramel fabric superior to vinyl, a 12V fridge and a sink with a small servery topped in Corian and an expectant drinkholder. There are opening side windows, roof hatches, plenty of head and shoulder room, and carpet underfoot. A separate sound system lets you party up top and air-con is fitted to the flybridge — a necessity on enclosed-bridge cruisers from our considerable experience. It’s too often an option. We’d also insist on the teak dinette being convertible to create a cruising crew bed or at-anchor skipper’s bed up top close to the helm.

Twin Raymarine widescreen navigation displays, bowthruster, autopilot and good views inspire you to cast the lines and go cruising. Vision back over the cockpit was similarly clear when reversing to offload our photographer or chase a fish. The QuickShift electronic controls and stainless steel wheel fall to hand, while the upgraded Rayline high-backed helm seats provide terrific support when back underway.

Like all good cruising boats, the Caribbean 49 has oodles of dry storage for stores, watersports gear, spares and more. The boat’s lazarette is just huge. Twin bait tanks and a big eutectic cockpit fridge-freezer let you carry the minnows out yonder and then the subsequent catch back home. The cockpit is also traced by covered sidepockets that still permit toe-kicks so you can lean outboard with security.

With a carpeted cockpit, this was obviously more of a cruise than bluewater fish layout. There were no outriggers, either. But for cruising, we’d make certain we found a good trimmer to cut some cloth or vinyl for an extended cockpit awning. It’s such a vast sun-drenched area you will be coveting shade around your lunch table. In the West, they might even fashion a GRP cockpit top with clears as they are wont to do.

A couple of other details: the moulded sidesteps to the sidedecks are a boon; while looking a tad clunky, the high and long trailing bowrail adds to the safety factor; and the foredeck with trusty Muir windlass has plenty of room for tender, davit and cradle (yet another must-have addition for your cruiser).

Back in the cockpit, there is a sink-and-storage unit that seems almost free-floating rather than integrated, but it’s bound to work just fine. Engineroom access is via a hatch in the saloon. We have no issue with Caribbean’s engineering, the boats have outlived most, other than to say the bare plywood ceiling didn’t meet our expectations and a better finish is expected.

At least the Caterpillar engines enjoy a comfortable abode with servicing room around all sides. There are also watertight bulkheads and (having checked) the sound of the generator and air-conditioning running won’t intrude on day-to-day living.

While I suffered déjà vu upon waltzing indoors, as the layout is the same as the 47, the finish has been lifted here and there, we’re told. Moreover, those who like to spend time aboard will never weary of the big U-shaped lounge and two-person settee opposite that converts to spare berths via the pullman method. Indeed, in rough weather, this is the place to sleep. New LED lights let you light things up to a degree all night without fear of flattening the batteries.

The owners of this boat also opted for an icemaker, washer-dryer and big flatscreen television. This way you can hunker down come hell or high water. To this end, the galley will cater for the gourmand, with its (second) fridge/freezer, four-burner electric hob, convection microwave oven and dishdrawer-style dishwasher.

In some ways, this is the model galley in the 49 class, with more room, more bench space and more plain functionality than more modern competitors. There are fiddle rails and pot holders, plenty of powerpoints, and oodles of storage. Only the Granicoat is a bit passé; give me solid surfaces any day.

Accommodation is forward in three cabins that includes a portside double bed against the hull side but away from the noise of water slapping on the chines, a starboard cabin with twin (adult-sized) single berths, and a stateroom forward with queen bed and en suite. The second communal bathroom includes another trademark Caribbean oversized shower.

It was a pretty windy day during our drive of the 49. Spray was often blown across the windscreen. But with an enclosed flying bridge, it was just a matter of engaging the wipers from time to time. And the flagship Caribbean felt really smooth due to the fact she runs quite flat.

“Because of the position of our manufacturing facility we have limitations placed on us as to how big we can make a boat in regard to road transport and the like, but we have used every spare millimetre available to us to create the 49,” said John Barbar from International Marine.

Barbar says he incorporated a significant number of upgrades into the new Caribbean 49, including a new swept-down and curvaceous flybridge hardtop complemented by new-profile opening side windows and rounded rear hardtop legs, which give it a modern and stylish upper structure.

The bowrail is also said to feature a new stylish swept-down look, while the interior appointment has also been taken to a new level in order to meet the expectations of current buyers, explains International Marine. Nathan Ghosn from the Sydney dealership, Sylvania Marine, says, “The main reason for the bigger cockpit is the market was asking for it. There are a few Caribbean 47s in WA that the owners had extended, and they were well received.”

At the same time, the factory took the opportunity to change the hardtop mouldings to give it a more streamline look, along with the bowrail and a few other small items. The interior got a good makeover, with more polished timber work and upgraded fittings. The shaft angle was also changed and that gave the boat a more efficient planing angle along with better steering.

Yet for all this the boat doesn’t so much bend to fashion as set out to provide extended service and timeless lines for its owner. The antipathy of a fashionista and akin to good old fashioned bricks and mortar on the water. Having said that, the 49 is a more seamless boat than the former 47. The new hardtop really helps.

PERFORMANCE & HANDLING
The key cruise speed is 20.3kts at 1730rpm for 113lt/h in total — excellent for a 49-footer that can carry 900lt of water and 2700lt of diesel for long-range cruising. At 20kts, your safe range is about 430nm. That will let you port hop along the Eastern Seaboard and enjoy long-hop cruises on the West Coast. The wipers were engaged during the test to rid the windscreen of spray, but that’s the price you pay for a flat-running efficient boat with a real feeling of weight and solidity when bounding offshore.

* Official sea-trial data supplied by Sylvania Marine after a run with the tide.

TRADEABOAT SAYS…
Compared with the other two big Australians, Riviera and Maritimo, the Caribbean is somewhat shorter on luxury, frills and flash finish. But what you get with the 49 is in some ways an even more capable cruiser, with greater standard fuel and water storage, bigger fridges and more useable outdoor space. Family-owned International Marine plays a very safe game, sticks to its guns and builds timeless cruisers. The company has been manufacturing boats for more than 50 years at its Scoresby facility, 25km southeast of the Melbourne CBD, and remains afloat and debt-free.