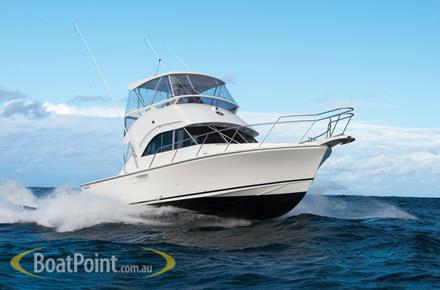 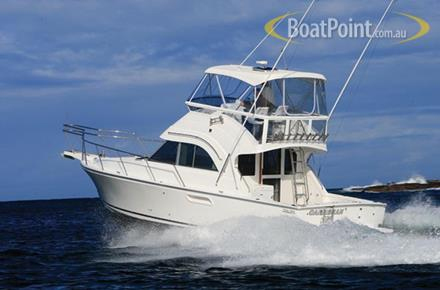 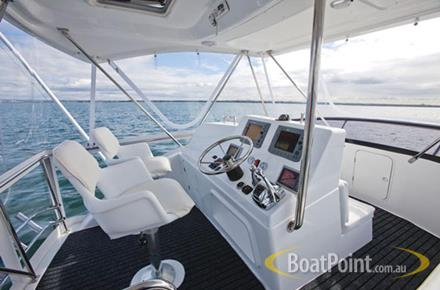 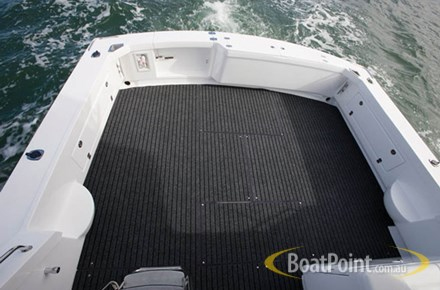 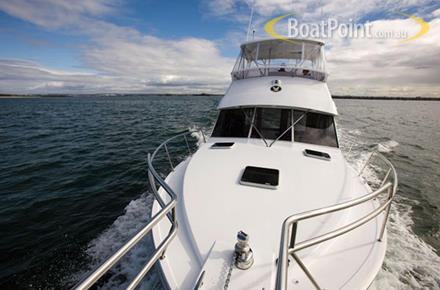 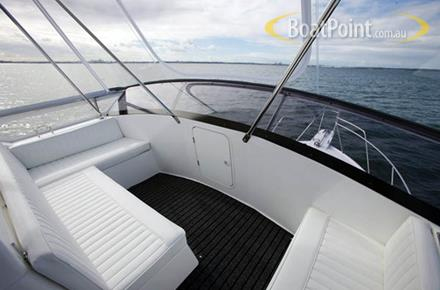 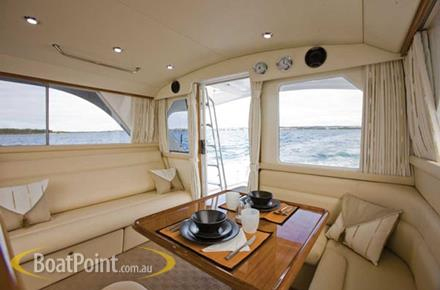 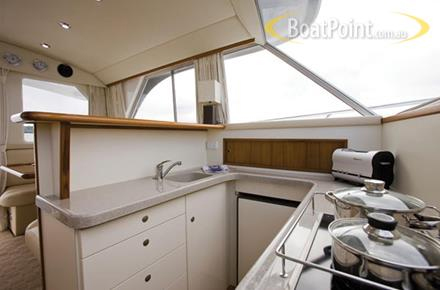 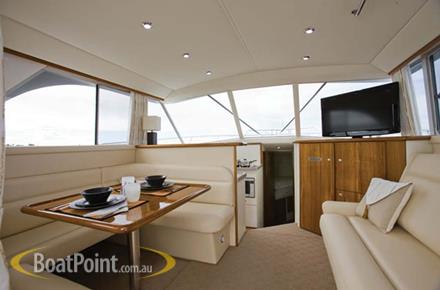 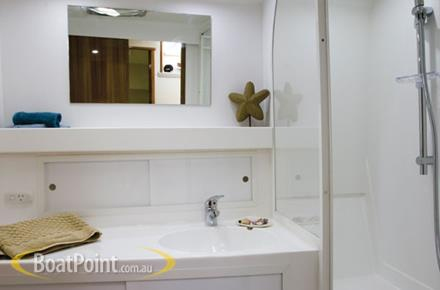 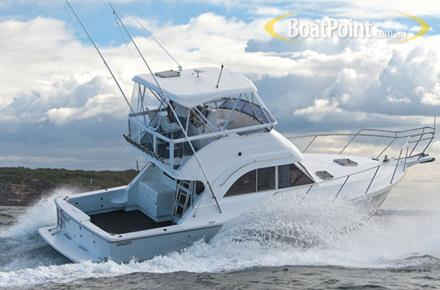 New 35 with tweaks is the best one yet

The new Caribbean 35 has wet-track form, more sea miles under its hull than any other Australian-made cruiser, almost 40 years of continual production history. But unlike the 750-plus 35s before it, the latest Mark III variant boasts a smarter fit and finish, a redesigned flying bridge with extra room, more modern mouldings and contemporary furniture, and the greater modcons. All that’s left is to add the family and/or friends, fishing gear and fodder.

Of course, the Caribbean 35 began life as the Bertram 35. International Marine in Melbourne made that boat under licence from 1971-1986. But Mark I had a finer entry offset by a lot of flare in the hull topsides for lift. Then, from 1986 to 2010, the Mk II reigned. That new hull lost its flare and had a fuller bow for more buoyancy. And it gained a second portside cabin. Hooray.

Enter the new Caribbean 35 based on the same hull as the Mk II, but with new flying bridge and cockpit layout and, to my eye, a noticeably improved finish. “We’ve sold hundreds of 35s over the years, but the way they are used has changed,” explained Nathan Ghosn from Sylvania Marina. Nearby brother Matt was working behind the scenes on fitouts, while founder and father Paul keeps the sibling rivalry in check.

“In 1982, a 35 represented the pinnacle of boat ownership. Nine-tenths were gameboats and sold to blokes. We had paper sounders and 27 Meg radios back then. Taking your boat from Sydney to Port Stephens was a huge trip. Today, well, you’re more likely to have mum and the kids involved. The boat cost half a million, it’s a huge investment equipped with the latest chartplotter, satellite television, and depth sounder that reading 1000 fathoms.

“And today we take the boats anywhere,” explained Ghosn, whose website opens with the catchphrase “destination anywhere.” He goes on to say that one Caribbean owner with a 35 has headed from the Gold Coast around the top to Weipa. He lived aboard for three months, dined out on barra and mud crabs, before ranging back to the Goldie.

A pair of trusty 5.9 litres Cummins QSB 330hp common-rail electronic engines power the Caribbean 35 to a top speed of about 30 knots. But it’s the control that is Caribbean’s mantra and at 20 knots the boat takes care of itself. Press the autopilot and let the well-balanced hull reel in the sea miles. It’s also remains pleasantly dry underway.

Engine access is just fine for owner/driver pre-departure checks. You enter via a floor hatch in the saloon and there are adjoining hatches forward. The engine coolant bottles are where you can see them, the fuel filters hang off the rear bulkhead along with the battery charger and electronic engine boxes, and there were upgraded dripless shaft seals.

But in a matter of about 15 minutes you can have the furniture and floor out for serious servicing, better access to the rocker covers, and unfettered room around all sides of the engines. The 405 litres allow water tank is forward to port, offsetting the weight of the generator to starboard, which might necessitate an application of trim tab when the former is empty. They, however, are optional.

Fuel is carried back aft in a GRP tank, with access to the steering gear, but the big thing to embrace underfloor the storage hold between the lazarette and the engineroom. There’s room for deck chairs and crab traps, outboard engine, roll-up tender, extra portable icebox, bait and berley. The big hold is something sadly lacking in today’s pod-driven cruisers with aft engine installations.

The 35 Mk III pictured hereabouts had a carpet-lined cockpit that saved more than $14,000 on the teak option. It’s a trend that’s during the present pared-back times. However, there’s no change to the cockpit space, with 9.3 square metres catering for a team at a tournament or the family with an outdoor setting. The swim platform isn’t the deepest but big enough to sit on and you get a hot-cold shower nearby.

The big change is the moulded sink unit and the icebox/fridge. No longer a split arrangement, MK III has the flybridge ladder to starboard and a portside combo unit with huge icebox (eutectic optional), sink and storage. It’s a way smarter moulding than 35s of yore, though the inside finish of the hatch could be improved. A trifling matter.

Matching the new, more rounded mouldings is a smart extended flybridge that casts shade over the aforesaid moulded sink and icebox, thereby creating a great perch from which to wait for a bite or hang out. There are recessed LED lights, a centre spotty, stainless-steel latches on the sidepockets, and split live-bait/dead bait bins in the transom that double as additional iceboxes or possible fridges.

Besides flipping the ladder to starboard, the new flying bridge is where the biggest changes have been made. There’s a larger and smarter moulded hardtop, and the flybridge moulding itself is no longer a serious of modules screwed together but a one-piece unit. With greater floor space and more room around the back of the seats, crew will like it. The co-pilot can get in and out of his seat with ease, while a new portside forward lounge beckons.

Surrounded by impressive (though optional) factory-supplied Seaflex clears, the flybridge now features a hatch over its ladder. That’s welcome to prevent kids or crew falling through while underway. Additionally, the hatch reduces running noise. But a bigger deal for serious cruising types — and especially game fishers — is the greatly increased dash real estate for mounting any number of large screen sounders and plotters up to dual 15in plus extra 10in.

The MKIII hereabouts had twin Raymarine C80s, twin Vesselview engine-monitoring panels for the Cummins, the latest stop-start combo ignition buttons with separate emergency stop, electronic shifts, Clarion stereo remote, with the VHF mounted in an overhead radio box. Even the drinkholders are heavy-duty models in keeping with the Caribbean tradition.

It’s a great flybridge that takes the 35 to new heights.

With a reworked single saloon door, there’s more room for the solidly fixed dinette at the portside U-shaped lounge. You can comfortably seat four here and a few more with loose chairs pulled up. The high-gloss teak joinery, smooth rather than ruched upholstery, subtle pelmets, and overall fit and finish were impressive on the boat we reviewed.

Thanks to LEDs, the 35 now draws 2.2 amps with lights blazing compared with 18.4 amps in the former guise. The practical stuff remains: opening windows for cross-flow ventilation; a starboard lounge that converts to a Pullman berth and three-quarter double below; storage in drawers and a cabinet with flatscreen television atop; simple 12/24V switch panel, Clarion stereo and Onan start/stop.

Across the floor, the U-shaped portside galley remains unchanged. Amenities run the gamut from Panasonic microwave and Blanco two-burner hob with potholders to a useful number of 240V outlets of GPOs, granicoat servery, pot and appliance cupboard, and more. Clear views extend in all direction, adding to the sense of space, but as Ghosn says while pointing to the cockpit, hinting at the likely aftermarket barbecue, “it’s all happens out there.”

International Marine and most owners remain content with the two-cabin, one-bathroom accommodation plan. The portside cabin contains bunks adequate for adults and perfect for kids. The owner’s stateroom in the bow has an offset double bed and a big drawer among its storage solutions. Most owners fit extra LCD TV/DVDs these days.

The starboardside bathroom is a beauty for a 35, with a big separate shower stall, touch-operated LEDs overhead lights, and electric (albeit noisy) Jabsco loo. With 405 litres of water, you have a boat that a family can live aboard for up to a week in comfort, which serious crews can campaign in tournaments, and which above all is tried and tested. Press the go-to button and the 35 will do the rest.

– Supremely seaworthy and frugal to boot

With a typical load of three-quarter fuels and full water, though nothing by way of owner equipment and provisions or gear, the Caribbean 35 MK III held a smooth cruise at 2000rpm of 18-19 knots across the lumpy 1.5m seas and swell. Consumption was about 71 litres in total equating to a safe working range of 320 nautical miles from 90 per cent of the 1350 litre supply.

At 2200rpm, the turbos sound more active and you get 21.5 knots for about 80 litres/hr and a 330nm range. High-speed cruise was clocked at 2420rpm and 25 knots for 91 litres/hr and a 335nm range. In other words, the boat covers the same distance anywhere from 19-25 knots, so the sea state rather than the engines will dictate how fast you should go.

That said, top speed of 29-30 knots is on par with market expectations for a flybridge cruiser, though it’s more like 28 knot by the time you put all the gear aboard. Offshore, the 35 hull proved efficient and seaworthy in the confused seas. We’d happily own one.

The Caribbean 35 has always been considered a boater’s boat. For decades, game fishers and offshore boaters have piled aboard for the sense of safety and seaworthiness too often missing in production cruisers than have become more like apartments than real boats.

That said, the new 35 MKIII is a much more family orientated cruiser than its predecessors. The finish has been lifted, the amenities improved, and long-serving Caribbean dealers like Sylvania Marine add their own special touches. Fish, family, cruise or kick back, the MKIII is the best 35 yet.